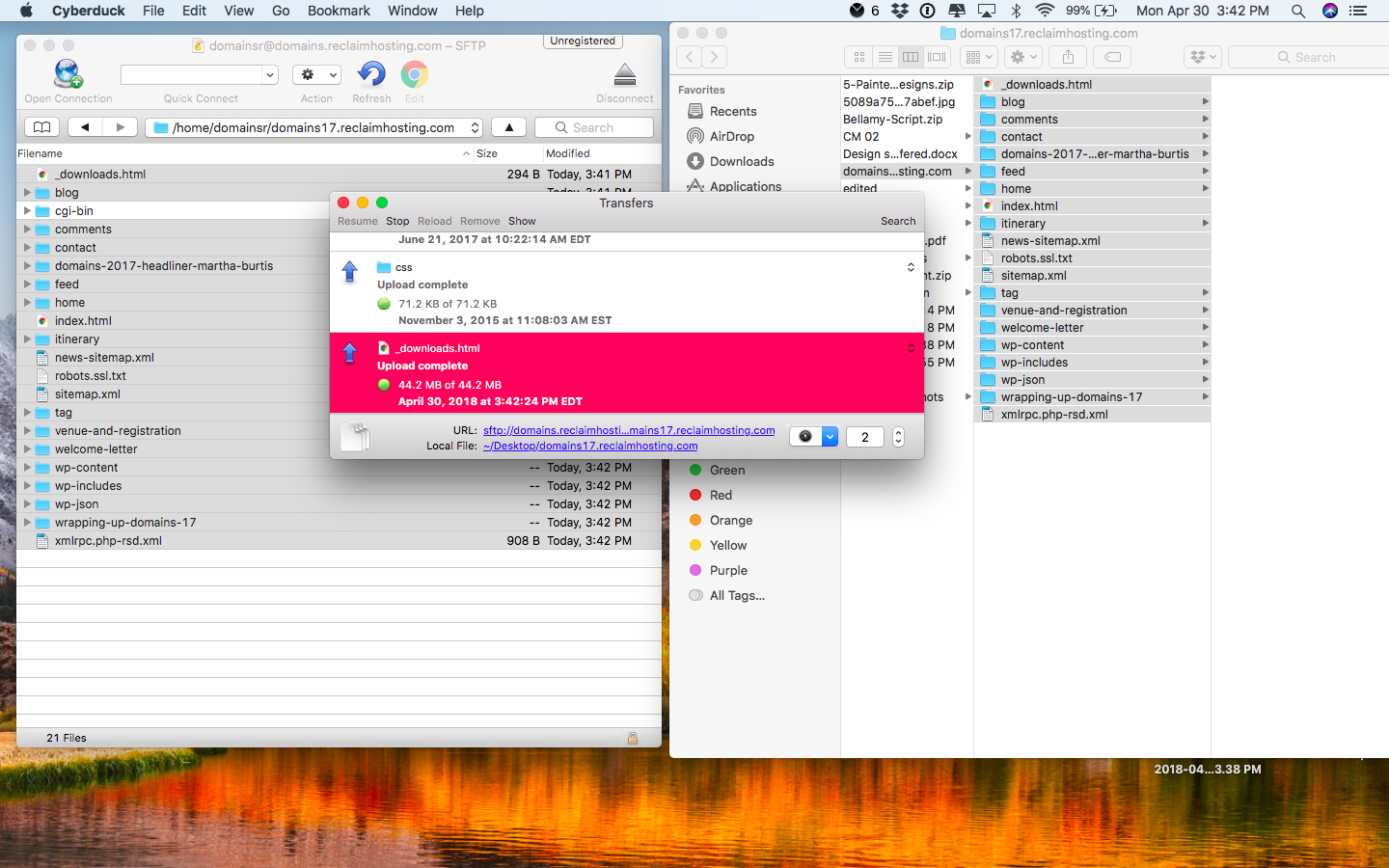 It’s hardly news at this point, but Reclaim Hosting isn’t doing a Domains conference this year. We loved Domains 17 (and are currently mulling over a Domains 19) but we deemed 2018 as a gap year a couple months back. This has meant that the conference website, domains.reclaimhosting.com, was just sort of sitting there with content that is now close to a year old. I was also growing rather tired of logging in every now and then and making sure all plugins, themes, and softwares were up to date. What’s even more, the Domains17 site was sitting on domains.reclaimhosting.com, meaning if we were having a Domains19, things would obviously need to be shuffled around.

On an unrelated (or is it?) note, I’m headed to California in a couple of weeks to take part in Stanford University’s Preservation Workshop to chat about archiving digital projects and possible strategic partnerships with preservationists and technologists. So to say the least, I’ve had archiving on the brain over the last week or so. As part of my preparation for the workshop, I’ve been wanting to play around with and explore some of the digital archiving tools that are already out there. Though I’ve recommended SiteSucker to many Reclaim users in the past, I’ve never given myself the chance to play it. So between this workshop and the Domains17 site, I thought there would be no better time than the present to get going:

I started first by making the subdomain, domains17.reclaimhosting.com, and then added it as an AddOn domain to the cPanel account where the current conference site resided.

After confirming that the site was completely up to date and loading securely on the new domain, I opened up the SiteSucker MacOS app that I had previously downloaded. (It’s $4.99 in the App Store, fyi. Kind of a bummer, but I imagine if you do some serious archiving you’d make your money back rather quickly with the amount of time you save. It’s lightning fast.)

^Screenshot of what the SiteSucker window looked like while it was working.

I simply entered the URL and pressed enter. Within two minutes it was done! I pressed the folder icon (top bar, middle) and could immediately see all the WordPress site files that had been translated to Static HTML. Once having the files on my local hard drive, I closed out of SiteSucker and opened up my FTP client. (My personal favorite is Cyberduck.) I navigated to the domains17.reclaimhosting.com directory, removed the existing cloned WordPress files, and uploaded my new static HTML files.

I refreshed my browser and boom! The site now loads beautifully (and quickly!) over HTML only. I had an issue with one of my visual builder buttons still linking back to the old domain, but that was an easy fix. I used Chrome’s inspect feature to figure out where the link was located in the code and then used the command+find tool to fix it in my File Manager.

From start to finish, this took less than ten minutes complete.  Not a bad for a little afternoon project. I’m excited to continue playing around with Sitesucker, but very impressed so far.