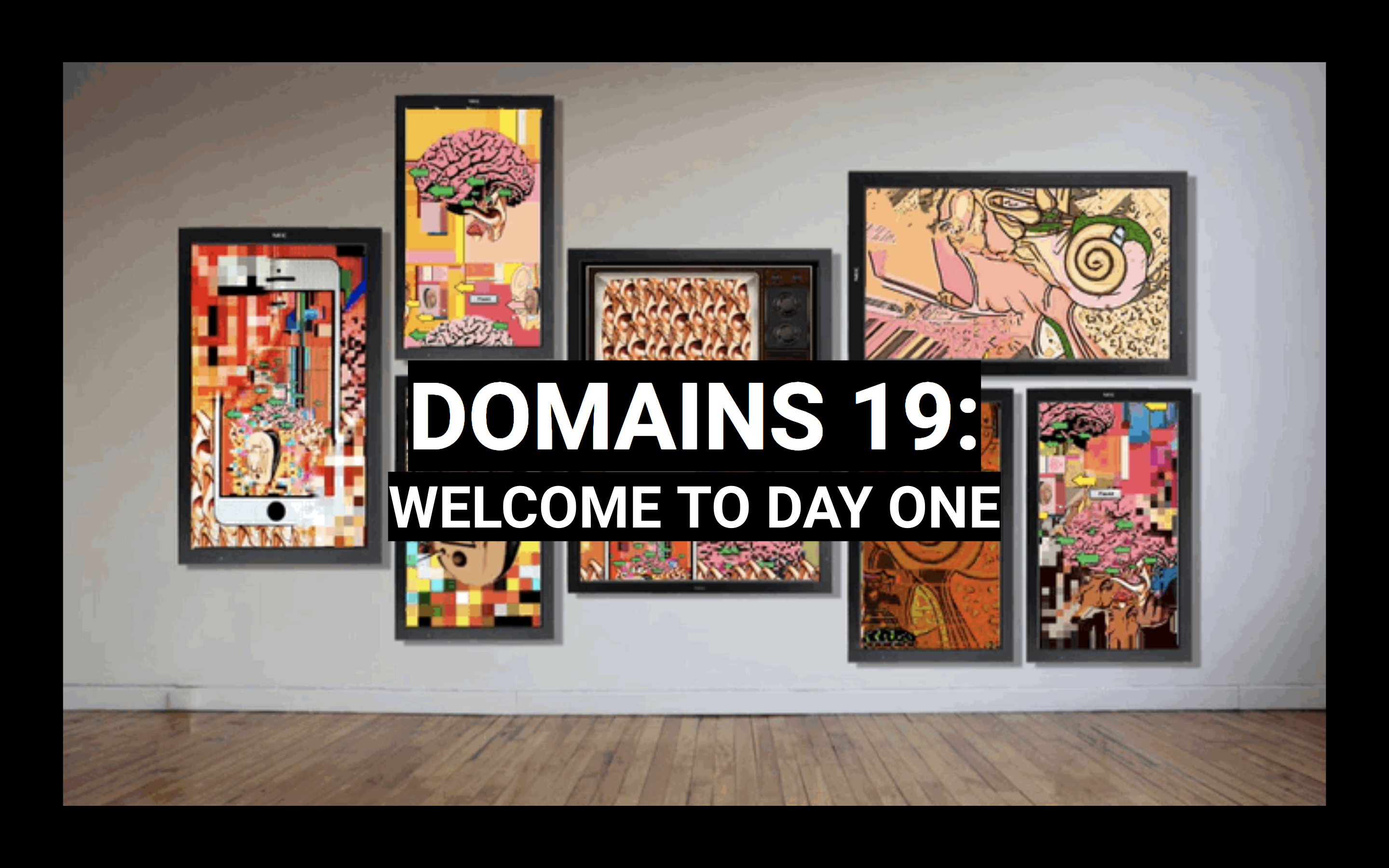 The second Domains Conference has been in the works since last September, so it feels a bit surreal now to be back home, one week later, writing that Domains19 has come and gone.

I’m not exactly in a position yet to even begin unpacking all of the conversational goodness that happened in Durham, North Carolina over those two days. I was in hostess/event planner mode for the large majority of the event, so my reflections to the concurrent sessions will likely happen over the next few weeks as I watch recordings. However my in-person experience was still slightly magical, and I’ll do my best to share highlights below:

I arrived in Durham on Saturday evening after a delayed (and then delayed again) series of flights and began prepping right away. I met with our 21c Event Manager and toured the venue space for the first time since last September. That was a bit nerve-wracking if I’m being honest. I had taken as many pictures as I could when I originally saw the space, no doubt, but still had this looming fear that I spent months planning an event around a made-up vision for the space, all the while misremembering how the space would actually function. If that makes sense. My fears were immediately put to rest, however. The 21c Museum Hotel never disappoints!

After spending way too long talking about extension cords, chair placements, light switches (yadda yadda, etcetera etcetera) I quickly put my bags in my room and walked outside with one goal: to get lost. LOL, if only I was kidding. I walked pretty much every street and alleyway around and near 21c with the sole purpose of exploring the area so I could answer questions if needed. I retraced my steps to Monday Night’s event space, grabbed a quick bite to eat, and then went to bed early.

The rest of the Reclaim team got to town on Sunday morning, and before we knew it we were unpacking the van and setting up the registration table, t-shirt table, art installations, and various signages. And, of course, we had to test out the arcade games to make sure they were working properly.

One of the major differences in how we carried out Domains17 vs. Domains19 was how we organized internally before and during the event. In 2017, there were so many helping hands (thankfully) and so many things to do but everyone ended up working on top of each other instead of spreading out and manning different stations. Even further, no one knew where anyone else was without going on a wild goose chase. Granted, we had delegated certain things like who would be keeping time during concurrent sessions, but that still only meant that each person knew where they were supposed to be but couldn’t reference where anyone else would be.

Enter Domains 2019 Rundown. The Rundown was an annoyingly precise schedule of everything that needed to happen, by the hour, from setup on Sunday night to breakdown on Tuesday evening. It had internal notes & reminders (sheesh) and was color-coded by person (yikes). It became a running joke by the end, to make sure everyone would “consult the Rundown!” and the Reclaim Team will likely chuckle that I’m blogging about it now. But in reality it proved to be extremely helpful, and I consulted it more often than I care to admit over the two days. That’s definitely something I plan on carrying to a Domains 2021 if that happens.

The conference began with a bang as sava saheli singh and Chris Gilliard opened with a compelling keynote that pushed the audience to think about discriminatory practices and imaginative possibilities for edtech through the use of storytelling. As Joe Murphy put it, the presentation was hardly a presentation at all, but a string of futuristic sci-fi stories that got wheels turning from the get-go. The Domains conference has always stood behind creative, experimental ways of “conferencing” and I think these two presenters/artists/storytellers pulled it off.

The Art Fair, which followed Chris and sava’s keynote, was absolutely one of the biggest highlights of the conference for me. We did something similar for D17 with the Domains Fair Showcase in which attendees were invited to engage with their peers in digital demonstrations of projects happening on their respective campuses. Differently, the D19 Art Fair was less of a poster booth session and much more of an interactive art display that dealt with one of the conference themes. Both the D17 Showcase and the D19 Art Fair were great for different reasons, but I personally enjoyed this one more simply because it felt more creative. I mean, these artists brought their ‘A’ games. Here are some of my favorite scenes from the Twitterverse:

All 360 degrees of this piece required the attention of the viewer. I had the pleasure of spending a few silent moments during sessions to walk around and explore, and I feel grateful for that. Ryan, Tim, and Jim really outdid themselves with putting this together. More details about the installation can be found in Jim’s post, 5 Min Tour of Reclaim HQ.

After the completion of the Art Fair and a series of attendee presentations, the entire group met back in the Main Gallery for lunch & quick viewing of sava & Tim Maughan’s Screening Surveillance film, A Model Employee. The Big Data Surveillance project has produced a trio of short sci-fi films, all with extremely ‘Black-Mirror-meets-EdTech’ vibes, so the lunch viewing complimented the dystopian stories from Chris & sava’s keynote quite nicely. We were also able to put the films on a loop in one of the upstairs galleries which ended up making a super cool permanent art installation. This was such a different way to ingest conference themes, and I’m so happy we were able to feature these films throughout the event.

I also found myself taking a moment on the afternoon of Day 1 to think back to where I was exactly two years prior: Physically- OKC for Domains17; Professionally- Operations Manager at Reclaim, and wanting more interactions with DoOO/Managed Hosting schools; Personally- recently moved from Madrid to Fredericksburg to begin working at Reclaim HQ. When lined up like that, in combination the mirror selfies, I can’t believe how much has changed! I’m certainly not the same woman from the 2017 photo, and it’s cool that the Domains Conference has become such a large cornerstone for me to track that growth.

After wrapping up sessions on Day 1 and taking a dinner break, the D19 crew made their way to Durham’s finest: Quarter Horse Bar & Arcade! It was fun to connect with everyone after the first full day of Domains, and then pressing pause on the conversation to go play an arcade game. :)

If you’ve read this far, congrats. If you’re interested in reading more, I’ve got a Day Two post coming soon!