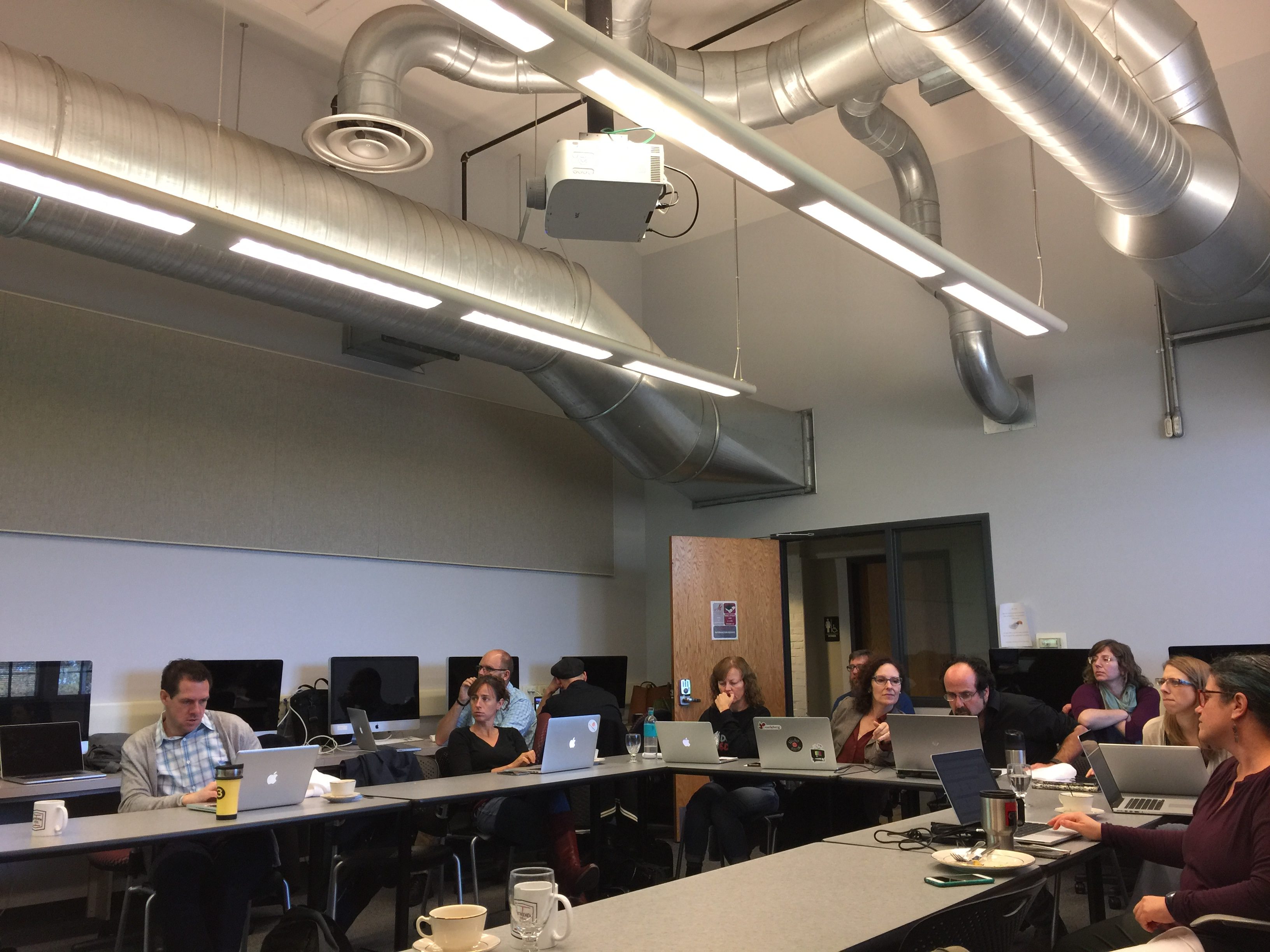 A couple weeks ago, Jim and I had the pleasure of visiting Muhlenberg College, one of Reclaim’s latest institutions working on a Domain of One’s Own initiative. They’re doing great stuff, and I count myself lucky to have been part of the conversation that took place over those two days.

On Thursday morning, we met with the Digital Learning Team over coffee and donuts to discuss keeping DoOO sustainable. We talked about ways to ensure its success, and what faculty & students alike can do to help maintain their core values as a liberal arts campus. That morning was definitely one of my favorite meetings over the course of the two days. The conversation went to Intellectual Copyright. Terms of Service. Usually hard to comprehend, usually containing. We brainstormed ways to open the Muhlenberg community to an interpretive environment in which the Terms of Service, the Intellectual copyright, is empowering.

What a great way to kickstart the trip, am I right? This idea of treating the Terms of Service of DoOO as a place to say ok- here’s what we’re actually saying & here’s how we’re empowering you: we want you to take ownership and responsibility of your content.

The Digital Learning Team, Jim and I also agreed that at the core of Domain of One’s Own, students should feel empowered and pushed to find their digital identity. Especially at an age where students are on the cusp of their professional future, giving them a place to build a voice and hone in on a skill set is essential. One of the most effective ways to get comfortable with your voice, with your opinions, at least in my experience, is by working on a platform that allows you to do so. And furthermore, utilizing the tools around you (both digital and human) to help you gain confidence.

So, we spent the following two days talking primarily about 1. creating those tools, and 2. pushing them out to the Muhlenberg community.

Later that day, Jim and I sat in on Tina Hertel’s course called Who Controls Your Digital World? We joined just as the students at been tasked to read Audrey Watters’ Domain of One’s Own in a Post-Ownership Society. (Worth a read!)

We talked about whether or not your presence online was malleable, whether or not we own our presence, and whether or not that was a concern for us. I mentioned deleting Facebook for those concerns alone and found that I wasn’t the only one to have done so. That said, we were still the minority. Others had developed this opinion of I have nothing to hide, so it’s not a big deal if it could potentially keep us out of harm’s way. Very interesting to see the shifts of perspective throughout the classroom.

“What is web syndication? How does is warp our sense of reality?” @jimgroom @Muhlenberg pic.twitter.com/vb1zu6rkHU

Lastly, we talked about this idea of how web syndication could potentially warp our sense of reality. For example, your Twitter or Facebook feed, a form of syndication, could make you think one thing about the world around you, when in fact, the exact opposite may be happening. Jim used Brexit to explain: based off of his twitter feed, he would have never guessed that the UK would have left the EU. Simply put, because everyone on his twitter feed had the same opinions about the matter that he did.

This is likely true about most feeds, is it not? At least in my experience, I hardly every say to myself, hmm, I’m going to follow this obnoxious individual on social media because they believe exactly the opposite of what I believe. What does this do for our realities? A reality that is largely constructed and interpreted through social media?

As a final stop for the evening, Jim’s Keynote was called A Pandora’s Box for Teaching, Scholarship, and Identity. ^Jim jumped into his talk by explaining his ‘Pandora’s box’ concept: taken from the 1955 noir Kiss Me Deadly.

He pushed us to think of “Domain of One’s Own as a Pandora’s box… but for good.” It was an awesome talk that questioned what educational technology looks like beyond the classroom, what it means to manage your digital life, and how we can gain a voice that explains who we are.

Jim gave countless examples of students using DoOO to develop their digital identities and framed that out with an overview of DS106, the popular online course in which assignments are created by students and submitted overtime. DS106 embodies this idea that a digital story is not just one thing, but a “comprehensive narrative of who you are,” as Jim suggested. And after taking the course as a student myself, I loved that the class not only celebrated the act of creating and submitting an assignment, but of narrating the process of creation as well.

If you’re interested in listening to the full keynote or reading through the live student tweets that went along with it, definitely check out Lora Taub’s blog post, The Bus Has Left And There’s No Coming Back. ^Explaining the difference between TLDs, subdomains, & subfolders in a breakfast faculty workshop. Also pictured: Domains & Donuts shirts!! From 1-3 each Friday, Muhlenberg offers support (and donuts) for building domains- wish I could be there for those sessions each week!

We’re doing domains & donuts in the co-lab from 1-3. Drop by for some support building your domain @Muhlenberg. pic.twitter.com/jPFeobbUHl

^Although these tweets were posted after Jim & I had already left, they’re a great example of the work that Muhlenberg is already doing. The “togetherness” is crucial for a project like Domain of One’s Own, and the folks at Muhlenberg are implementing that beautifully. I especially love that second image that includes the Digital Learning Assistants.

The Digital Learning Assistants, DLA’s for short, are in the beginning stages of something very similar to UMW’s Digital Knowledge Center. The DLA’s are a diverse group ranging from incoming freshmen to graduating seniors. These students are all at different stages of finding their “niche” in the digital world. This semester they’re framing out what it means to provide peer tutoring to other students, and how they can best teach themselves and learn from each other.

Jim and I had a chance to chat with them on Friday afternoon about what this teaching and learning could look like. Any passerby could have seen how much excitement was sitting in that room- the DLA’s are so ready & willing to better themselves and their peers. I loved it.

Though I didn’t have the chance of to work as a DKC tutor during my time at UMW, I did have the privilege of working directly with those who played a major role in bringing the Digital Knowledge Center to life. As Student Aide Supervisor, I worked closely with Martha Burtis, now Director of the DKC, and Jess Reingold, now Instructional Technology Specialist in the DTLT (along with other students like Meredith Fierro, Patrick Burnett, & Nora Forknall) on what worked and didn’t work during the early stages of implementation. It was cool to talk about these experiences at Muhlenberg with the DLA’s, and I can’t wait to see how they choose to work with the awesome tools at their fingertips.

^As a final exercise, Tim Clarke put the DLA’s into groups and had them do a quick assignment (fittingly, from DS106, submitted by Tom Woodward) called One Story / Four Icons. Though all final products were unique, all encompassed themes of empowering digital identity, holding onto history through digital archives, and learning and working with each other. Pretty swell, if you ask me.