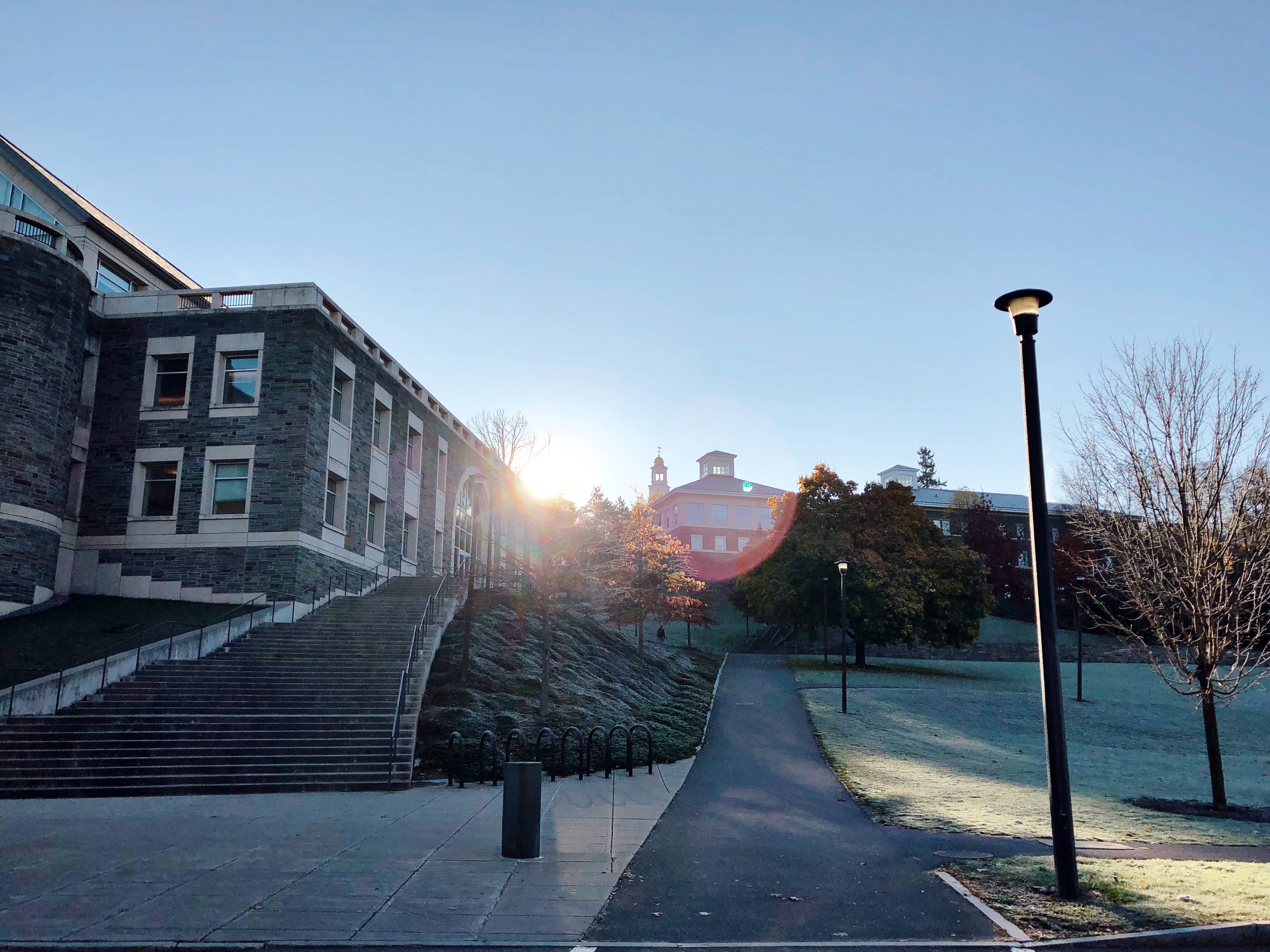 How is it already the end of November..? I wanted to set aside time this morning to write about my experience at Colgate University a few weeks back before I turn around and it’s suddenly 2018! After the Reclaim trip to NYC, Jim and I traveled to Hamilton, NY for a two-day training session with members of the Learning and Applied Innovation Team and IT Department. But before getting into the content summary– you can’t talk about Colgate without first mentioning the campus. There’s a reason it makes the list of most beautiful college campuses in the states; it really is stunning. My photos throughout this post will hardly do it justice, but I’m including them anyway. :) On day one, Jim and I met early with folks over coffee & bagels. Jim then began the first block by speaking on how DoOO came to be and how it has transformed over the last few years. I’ve heard this talk a handful of times now, so I was able to see past the initial content and focus on how I would approach a similar talk with my own twist. I’ve been shadowing Jim over the last year or so with the idea that I’ll eventually be able to give these talks & trainings on my own, so it felt good to find the headspace to think through some of that. Next, Jim and I moved into an overview of the Domain of One’s Own platform, bringing everyone up to speed on how WHM, WHMCS, and WordPress work together. Jim gave an introduction to the system, separating out the ‘need to know’ items from the ‘you’ll never really use this’ functions. From there I gave a more detailed outline of WHMCS & WHM and began to walk through the platforms in depth before lunch. We picked up where we left off after grabbing a bite to eat with more hands-on practice in WHM/WHMCS. Similar to one of my sessions during Workshop of One’s Own, we worked through common support troubleshooting fixes, user FAQ’s, and approaching support tickets. We also talked through setting up site syndication, domain transfers and even touched briefly on SPLOTs. And just like that, day one had come and gone. We spent the bulk of day two feeling out the needs and curiosities of those in the room, focusing heavily that morning on relevant ways to use WordPress, Omeka, Scalar & Drupal. It was cool to watch the team brainstorm and think through ways that their community could take advantage of these tools. I love using slavery.georgetown.edu as an example of an integrated domain for this sort of discussion. Georgetown takes a controversial topic and faces it head-on using WordPress for the main domain and Omeka for the archive. They also embed a historical timeline using Timeline JS, so that’s always a great piece to show as well. We also used Keys to Directing as a great Scalar example, Making Modern America for an Omeka Archival site, and Andréa Levi Smith’s course website for showing how DoOO can be used in the classroom. Andréa’s site was a great segway into where we spent the majority of our time that afternoon: SPLOTs! Her site was built off a template created by Alan Levine called SPLOTPoint. I wrote more about the excitement of the Colgate Team + SPLOTs here, but it was fun to feed off their ideas and play around with these templates in real time. And as Jim discusses here, we found that one of our most valuable moments of the workshop was narrating our thought process of familiarizing ourselves with these templates on the spot. I had never worked directly with the templates that Alan had created, so I was the perfect guinea pig. :)

I installed the SPLOTPoint template on the big screen (on this example domain) while everyone followed along on their own computers. After tweaking settings and customizing that for a few minutes, we moved onto another SPLOT created by Alan called Big Picture Calling Card (on this example domain). I was asked to narrate my thought process for finding settings/making customizations on the theme & template which led to an hour-long discussion on the future and potential of Domains at Colgate. This trip was valuable to me personally for many reasons. I felt more confident during the technical training portions of the workshop, compared to scenarios where I’ve shadowed Jim in the past. I also felt capable of carrying my own weight and truly tag-teaming the workshop with Jim, as opposed to interjecting every now and again. Jim also offered his critiques, strategies, and advice for talking at great lengths about Domain of One’s Own (a skill he, no doubt, naturally found) so that was immensely helpful as well. And lastly, I discovered a passion for SPLOTs. I was able to see the true potential of installatron templates during the discussions over those two days, and am very much looking forward to their future in Domain of One’s Own and beyond.